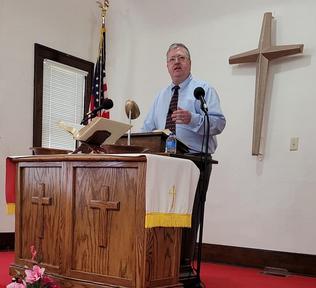 Over a century ago in the autumn of 1882, William Duley, a pioneer deacon of Dry Fork Baptist Church, suggested to his pastor Dr. William Henry Burnham, the propriety of establishing regular preaching services at the Carrington School House, making it a mission point.  Previous to that time a Sunday School had been held in the community by William G. Hatcher and others.

Dr. Burnham, never slow to act upon a mission enterprise, at once adopted the plan and began preaching regularly at the Carrington School House. In February and March of 1883, he held a protracted meeting at the schoolhouse, baptizing six people, from Dry Fork Baptist Church, formed the nucleus of the permanent organization with Dr. Burnham as pastor.

In the face of many difficulties, plans for the erection of a church went forward.  Judge William Carrington, who owned the land, gave one acre of ground on condition that a meeting house be erected.  The house was built.

The building of the first church house was the result of much self-denial on the part of this little group and its many supporters in the community.  The building completed, cost $1,571 and was dedicated on Sunday, December 9, 1883. After singing that good old familiar song "Near My God To Thee", Dr. J.M.P. Martin, pastor of the First Baptist Church of Fulton, Missouri read from I Kings 8:27.  Dr. Martin preached the dedicatory sermon and the prayer was offered by Dr. William Burnham.  The remarkable fact of this dedication was that the entire amount of the cost of the building and completion of this church was paid in advance and no collection taken at that service.

The growth of the church during the succeeding twenty-three years made it necessary to enlarge.  As a result, an addition was built at a total cost of $1,438.  This building was rededicated on September 17, 1907 by Dr. William J. Williamson, a member of the church with prayer by Dr. William H. Burnham.

As the storms of life sometimes prove too strong for weak human strength, so the elements of nature may become so powerful that things of wood and mortar cannot withstand the blast.  The events of Sunday, May 8, 1927 were such when a tornado destroyed the church.

With insurance and the help of friends, a new church was rebuilt.  E.E. Sampson was the contractor and the cost was $8,000.  The new church was dedicated in June, 1928 by Dr. Frank Powell.  The members met at Hewitt Lodge Hall in Carrington and faced the future singing "On Jordan's Stormy Banks" as they prepared to rebuild.

As the members of Carrington Baptist Church look to the future, the prayer of King Solomon from I Kings 9 continues to be our prayer as it was in the 1883 dedication:  "I have heard your prayer, I have hallowed this temple which you built and have put my name here forever. I will constantly watch over it and rejoice in it."  No words could better dedicate a church that would outlive the railroad and still be serving the community over a century later.

In all those years, Carrington Baptist Church had been served faithfully in its pastorate by 28 men of God.  From January, 2015 through December, 2015 CBC was under the Interim pastorate of the Reverend Jonathan Spurlock.  And from January, 2016 through October, 2017 Reverend Spurlock was the part-time, bi-vocational pastor, making him pastor #29 in the CBC history.

On December 31, 2017 Bro. Joshua Meranda came as the Supply Pastor.  He and his wife Julie brought an enthusiasm and yearning for the Word that Carrington Baptist Church had needed.  Bro. Josh and Julie had been praying for Carrington Baptist ever since seeing the need for pulpit supply in the Associational Newsletter…even before we knew they existed! (That’s how God works!)

Bro. Joshua filled the pulpit as Supply until May 1, 2018 when he was called as the Interim Pastor.  After much prayer on the part of all parties, a vote was taken on July 29, 2018 and by a unanimous decision, Bro. Joshua Meranda became the bi-vocational pastor of Carrington Baptist Church effective August 1, 2018.  The Meranda’s came to us as newlyweds, but have now added to their family with the birth of their son, Carter in early October, 2018.  In February, 2019 Pastor Josh was officially ordained with a formal ordination service.

As of August, 2019 we are seeking the man God would have to fill the pulpit as our next pastor.

Praise Jesus we were blessed with so many servants who filled the pulpit from August 1, 2019 thru May 31, 2020!   Various churches, the Pulpit Supply List from the Missouri Baptist Convention, Grand Crossings Baptist Association and Preston Thompson (DOM) provided names of men who were available to fill our pulpit and bring the Word every Sunday for 9+ months.  This kept our church going during a time of uncertainty.

There were Sunday's filled with icy and snowy weather that we were unable to meet - then came COVID-19!  That wiped out half of March and all of April into the first week of May.  Finally, on Mother's Day, May 10, 2020 we were able to return to church (following CDC and Missouri Department of Health & Senior Services safety guidelines).  It was certainly a strange experience!

When we were able to return to worship, we had to sit safely 6 feet apart, no hugs or handshakes, the water fountains were turned off, and bulletins were printed but not given out by our ushers/greeters - instead, you had to pick up your own.  This is definitely a time in history we will never forget and we are writing of it here to keep it in the history of the church.

Once we returned to church, we were finally able to hear from one of the men who was scheduled to bring the Word prior to all the history-making events.  Bro. Robert Hayden and his wife Bridget came to us from Ashland Baptist Church.  Bro. Robert preached a couple of Sundays and we realized quickly, God had sent him to help us heal, grow and move on, but more importantly, he was here to help us reach out to our neighbors, our community - to evangelize! SHARE THE GOSPEL! Prayers were answered!